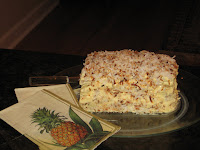 Recently, I saw an ad for a "recipe contest". It was featuring Philadelphia Cream Cheese and Paula Deen. I love Paula's personality, sense of humor, warm spirit, and of course her recipes! Her show on the food network is like a dose of comfort to me. I am so inspired by the cooking shows and as a result, have been led to create many original concoctions, as I call them. One afternoon, I saw the ad about the cream cheese contest with Paula and thought I'd look into it. The next thing I new...I was video-taping myself in my kitchen making my very own "cream cheese concoctions"! It was a riot! I should say "is" a riot because the competition is still on-going. I've already concocted 10 recipes. Each week, the competition calls for a recipe from a given category...i.e..week one is side dish week; week two is appetizer week; week three is entrée week and week four is dessert week. Then it starts all over again! We are now winding down with one more week to go. Next week is the final dessert week.
This has been a whirlwind...a fast and furious race to the grocery store to buy more cream cheese and other ingredients to create a unique recipe for yet another category. The rules say that we have to come up with our own recipe, using cream cheese, and it has to be prepared from start to finish in under an hour. At first, I was worried that I might not be able to create some items in under an hour...but it has definitely caused me to be more creative. It has stretched me in ways I never imagined. For example...before this competition, I had never made a movie on our digital camera! I had never used our computer's movie maker and editing programs! My husband had to give me a crash course in editing...and I'm sure he was regretting having encouraged me when I told him I wanted to enter the contest! Even so, he has been so supportive and he trained me on the computer process very well. I was flying solo soon after my speed editing course! I've been my own producer, director, lighting person; make-up and hair stylist; food stylist; cook; framing person (and what a challenge that was); and editor! I've had to start over a few times when the camera decided to shut off in the middle of a take...I've walked back and forth from the camera to my filming spot time after time, making sure I was framed up properly before starting; and I've had to creatively edit those clips where I've stepped out of frame just a bit or re-do those takes when the camera stopped. Yes, I've had a few arguments with my new companion...Canon! And... the microphone on the camera is so bad... it has a certain tinny sound and is a bit hissy which makes me sound like I have a lisp at times! Great! Just what I need when I'm trying to present myself in the best light! Yikes! The cooking and creating of recipes is the easy part. I love to cook and I'm always coming up with my own concoctions anyway...so that part is a breeze!

Well, now that the contest is winding down, I'm a bit sad. I haven't won any of the categories but I'm still hanging in there, hoping and hoping and hoping! They still have to announce the winners from round two for entrée and dessert. There is still a chance!

Oh, I almost forgot to tell you...during round one of dessert week, Paula gave me an honorable mention! She liked my "no bake pineapple fluff cake"! She featured it on the site and said she wished she had thought that one up! :) What a hoot! I was elated! Earlier that evening, I was feeling a little down after having worked so hard during the course of this contest. I was almost feeling like giving up, as it had been a rough week of balancing life and work and then creating recipes, not to mention lost sleep over thinking about cream cheese all night long...even getting up from bed to write things down...some of which I could not read in the morning! While feeling a little worn out and blue...I came to my computer and logged into the site and noticed a few messages from some of the girls congratulating me on getting mentioned.... (by the way these new "philly friends" that I've made in this community are amazing, sweet, genuine and very talented women whom I'm honored and delighted to call my new friends!) ...I then went to the home page and there it was--my video and Paula's comments on my recipe! That was the best feeling! Paula Deen now actually knows my name!!! I was on top of the world! It gave me a surge of adrenaline that has not stopped since! So this is round two of dessert week...I'm still dreaming of new ways to incorporate cream cheese into my recipes. I'll let you know what I come up with next! You can also find me on You tube in "how to & style" under key words cream cheese!
Meanwhile, you can click on my video below to see the cake recipe!
Here's a copy of what Paula said :) ....

Here's some Dessert Videos from last week that caught my eye. ...after pouring over hundreds and hundreds of recipes, certain ones stand out for different reasons, whether they're funny or just really delicious looking dishes!

Sometimes I see a recipe and not only do I want to gobble it right up, I also wish I thought of it! This is so true of Lorraine Brown's No Bake Pineapple Fluff Cake. Pound cake and pudding and coconut! (oh my!)" :

(it fades in from black, so just click the play button on the grey bar below)...

Posted by A multi-dimensional life at 12:10 AM No comments:

A tribute to mom!

What my momma said!
(written by Lorraine Brown, copyright 2006)

Pretty is as pretty does is what she always said,
Don’t ignore me - listen to me,
One day you’ll be glad you did.

What’s inside your heart is what will shine right through your eyes;
If it’s truth you tell I’ll know it, but I’ll also know if it’s a lie.
So keep in mind that though you may have secrets to keep,
What’s inside can’t always hide no matter how dark or deep.

Pretty’s on the inside, darlin’ - it’s where it all begins…
Not lipstick or a pretty dress; not sparkles or sequins.
Your future lies in choices - it all depends on you;
You can choose what’s right or do what‘s wrong;
The consequence you can’t un-do.

Pretty is as pretty does is what she always said…
Don’t ignore me - listen to me,
One day you’ll be glad you did.

It's been a long, hard year -
When she thinks about what’s happened,
It’s so hard not to cry,
Momma in a nursing home,
Daddy passed away – he said he wanted to die.

She’d go home to visit -
She thinks about those times,
She and momma stayed up talking late into the night,
She knew that she could count on her to tell her what was right.

She remembers daddy -
Working around the house, so strong and full of pep,
The youth on both their faces,
The spring in both their steps.

Then the road took a different turn,
And momma lost her voice,
The stroke left her speechless,
She didn’t have a choice.

Daddy lost his will to live,
When momma fell apart,
His strength turned into weakness,
He died of a broken heart.

A long drive home and she’s half way there,
Before she realized,
That she’d been crying this whole time,
She wipes the tears from her eyes.

A year now since daddy died,
The grieving just takes time,
No words are left,
But none are needed,
All was said in time.

Now her visits with her momma
Are quiet in that place,
Yet momma smiles and claps her hands,
When she sees her baby’s face.

Even though momma’s words are gone,
They live on in her baby’s heart,
They’ll remain with her forever,
She and momma will never part.

Yes, momma smiles and claps her hands
When she see’s her baby’s face,
These special little moments cannot be replaced,
Deep inside she understands that she and mamma will never part,
Momma, can you hear me?  I love you with all my heart!

(Dedicated to my loving mother Anne who went home to be with the Lord on Christmas Eve, 2006)

Posted by A multi-dimensional life at 9:26 PM No comments:

Just in time for Mother's Day! 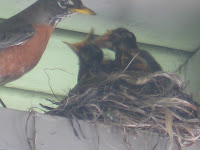 I've been watching a sweet momma bird nesting outside of my window. Each morning, I open my blinds to see her sitting patiently on top of the nest...keeping a close eye on me as I peer out the window and snap an occasional photo. Yesterday, just in time for Mother's day, we noticed that she had four hungry little babe's! She has her work cut out for her now...feeding her young...while keeping them within her site. What a sweet reminder of a Mother's loving care!
So precious!
Posted by A multi-dimensional life at 9:19 PM No comments: