Scottish Shortbread…I’ve always called it Scotch shortbread because that was what my grandma called it.  At least that's what I thought she said through her thick brogue.

Ever since I can remember, shortbread has not only been a holiday tradition, but a family favorite year round. My grandma Jesse brought her family recipe with her from Scotland many years ago. She prepared it with her magic touch year after year, using the purest of ingredients, including caster sugar and rice flour. She mixed the ingredients gently with her hands, careful not to overwork the dough, then baked it at a low temperature until just slightly golden.

While our family recipe is a classic recipe
consisting of flour, sugar and butter,
(I like to add vanilla)...there are several variations of shortbread and shortcakes form different regions of Scotland, going back to medieval times. Refined shortbread is said to be accredited to Mary, queen of Scots in the 16th century ~
she named the most traditional, triangular shaped wedges “petticoat tails".  Shortbread was expensive then so it was reserved for special occasions such as Christmas, New Years Eve, and weddings.
﻿﻿﻿
﻿


As a wee lassie,
I was very excited to wear the kilt Grandma Jesse brought back for me when she went back to Scotland for a visit!﻿﻿﻿
﻿﻿﻿

I’m intrigued by my Scottish heritage and fascinated at the history of our cote of arms (family crest) and tartan (plaid). I’m also delightfully amused by men in kilts ~ and thankful that I was never a “Scottish Bride” as Grandma told me that it was a tradition to break a decorated shortbread cake over the head of a bride at the entrance of her new house for good luck!
﻿﻿﻿
﻿﻿﻿
I loved listening to Grandma Jesse’s stories as she reminisced about (what she called) “the old country”! I listened carefully to discern her every word through her thick Scottish brogue…and watched as she magically mixed her dough to perfection. I now prepare this traditional shortbread every Christmas in her memory and I savor every buttery bite of my favorite “Scotch” cookie!
Here is my version of this buttery family favorite:

Grandma Jesse’s Real Scotch Shortbread
One stick unsalted butter, softened
One stick salted butter, softened
½ cup caster sugar or granulated sugar ***(see explanation below) ***
8 oz. all purpose flour
4 oz. rice flour
*(if you do not have rice flour, you can use 12 oz. of all purpose flour.)
1 tsp. vanilla (optional…my preference)
1)  Blend sugar and butter together on a board or large bowl ...
(grandma worked these together with her magic hands on a large board until incorporated).
~ This is where I add my vanilla ~
2)  Add flour and work into the butter/sugar mixture until it becomes a crumbly dough...
*(careful not to over mix….(for a nice crisp result)*
Press with your hands into parchment lined pan (I used a 9 inch square).
(a 9 in round  is also nice , and can be cut into triangles (petticoat tails).
Press the dough firmly into pan to ¾ inch thickness. 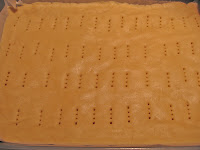 Prick with a fork to prevent bubbling.
Bake at 275 degrees, approx. 20 – 30 minutes. Oven temperatures vary, so it might take longer…it is important to keep an eye on it and bake until just slightly golden but not brown.
Remove from oven and allow to cool slightly (approx. 5 minutes) then with a sharp knife, score into squares or small rectangles, then cut through to bottom.  Dust with sugar.  Cool completely before removing cookies to platter or tin.

the parchment liner
makes it quite easy to simply lift the cookies out at once
*** "Caster sugar" is what they call superfine granulated sugar in Britain.  It was given this name because its grains are smaller and can fit through a "sugar caster" or "sprinkler".  Regular granulated sugar works just fine in this recipe...my choice... because caster sugar is quite expensive - (on occasion, I've actually placed regular sugar in a blender and pulsed it, allowing it to become more fine -
resulting in home-made caster sugar).  So if you ever feel that caster sugar is absolutely necessary, this tip is a great way to go!)...I just don't feel that the extra work in this particular recipe is really needed.*** (just my opinion though)!

I hope you enjoy this quick and easy recipe with its rich, buttery flavor and heavenly melt-in-your-mouth texture!
Posted by A multi-dimensional life at 1:31 PM 30 comments: