Two chicks and an Old Hen

One chick in Washington State and the other in Chicago! Separated by the miles, yet drawn together by similar interests...


The two chicks....my friend Deanna and me (Lorraine) ....united by a  love for cooking, baking, laughter, miniature dachshunds, and God! Our paths were originally led together a few years ago by a cooking contest where we learned of one another through our home made cooking videos featuring our original weekly recipes in an on line cooking extravaganza. Since then, we've been sharing recipes via facebook and our blogs.

Last year about this time, I had the thrill of opening my home to the crew of a new show,  My Family Recipe Rocks with host Joey Fatone , and this year Deanna had that same thrill.  I'm wearing a great big grin as I recall the excitement of my experience and I continue to share in the fun now as Deanna's episode is about to air!

Deanna’s love for baking and cooking began as she sat upon a baker’s stool as a little girl. Her love for people grew in the midst of church potlucks. She expresses her loves today creatively through speaking, writing for her foodie blog, television appearances as well as hosting guests, including celebrities, at her award-winning inn... The Old Hen Bed & Breakfast, Squanalme, Washington.

Deanna makes me giggle with her quick wit and I love the fact that she is just so real! As far apart as we are, it’s amazing at how technology has made it feel like she is right here. Well, one thing is definitely missing....I really want to sit face to face....hear her voice...see her smile...experience the warmth and coziness of her B&B, gobble up the delicious food she prepares, and laugh out loud  together in person! Until then...I’ll be so delighted to watch her in action in her kitchen with Joey Fatone by her side, cooking up a storm!  I can’t wait to see her episode air!

You can see Deanna on Joey Fatone's new show "My Family Recipe Rocks" on the Live Well Network this month on October 27th. She will be making four scrumptious recipes throughout an entire episode filmed at her B&B, The Old Hen.  Follow along on her Facebook page or on Twitter for updates . 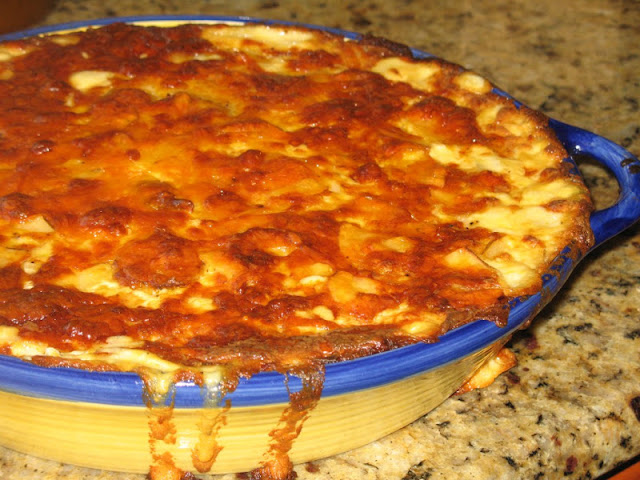 A perfect comforting, hot dish that goes well with any meal!


Rinse and scrub about potatoes until clean.

Prepare a large bowl by filling with cold water and a couple of teaspoons of salt. Set aside.

Cut potatoes in quarters along the length of the potato. Cut out any undesirable spots.

Using a mandolin or… the quicker and easier food processor, slice potatoes thinly.

Next, place sliced potatoes, cream mixture. Add sour cream and 3 cups of grated cheddar cheese into the large bowl with onions. Using hands, combine all of these ingredients very well.

Place a layer of potato mixture into baking dish. Then, from the remaining 2 cups of cheddar, place a layer of cheddar cheese. Make about 3 layers total with cheese between each layer then pour any remaining cream mixture over potatoes.

Finally, layer top with remaining cheese. Loosely cover potatoes with foil for the first 1-½ hours of baking so the top layer doesn’t over bake. Remove foil after 1 ½ hours. Bake for about two hours total or until a fork poked into middle of potatoes comes out easily.

It’s a good idea to put a baking sheet on the oven shelf underneath your scalloped potatoes in case they overflow.

For a fancier flavor, you can add some Gruyere or Comté cheeses in place of some of the cheddar, 1/4 cup of white wine in place of 1/4 cup of the milk, or add freshly chopped herbs or ham.


**I can't wait to see her remaining three recipes**


you can check your listings for Live Well Network to find the accurate times in your area.