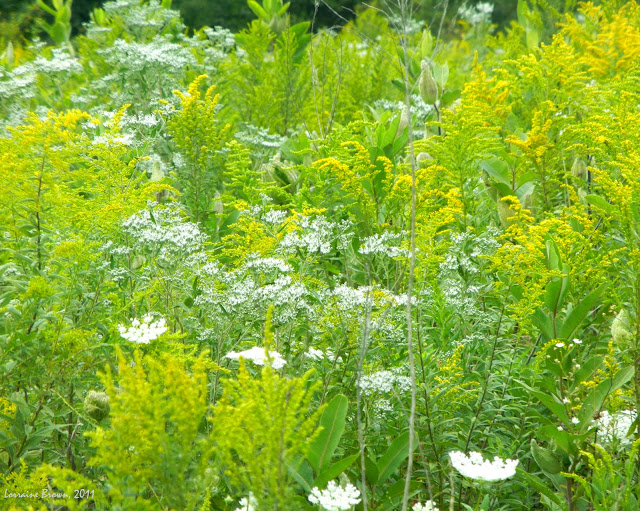 She pulled the car into the lot at the edge of the forest preserve and gazed out over the field of wildflowers, illuminated with the vivid glow of goldenrod against a backdrop of tall reeds standing on the marsh.

Her introspective heart was heavy.

She reflected back through the years, recalling episodes from her past which left her feeling rejected, abandoned, lonely, hurt, afraid, and hopeless. She was angry over some of her experiences as she felt robbed in a way...robbed of the life she dreamed of back then. She longed to be that little girl again...the one who was so very happy and carefree; the one who looked toward the future with bright eyes of expectation of a life filled with love. Somewhere between rejection and anger she was lost... The innocence of a child abandoned in the aftermath of rejection.

As the tears welled in her eyes, she suddenly felt a presence like no other.
The voice of God called out to her:


"My precious child, let go of anger; fear and hurt. I will make you new again. You must forgive it all and allow me to deal with those who hurt you. You must let all bitterness go so that you can have peace. You must also forgive yourself...really forgive. When I died for you I took your sins upon myself so that you would not have to die (yes I am your atonement); when I rose from the grave, I defeated death. I am alive and have come to give you life and a fullness of life!
When I ascended, I defeated evil.
You have nothing to fear! You have everything to gain! Life in me and for all eternity is yours if you will only accept it. I will heal you from all of your un-forgotten pain.
You will be free!"

He knew exactly how she felt and explained to her that every sorrow she has experienced, He has also experienced. This voice...this tenderness...this spirit...penetrated her heart, making it clear that anger need not be hers anymore; that her identity is in the one who looks upon her as the most magnificent creature...free...as He created her to be.

Tears streaming down her face, she envisioned herself as a little girl, standing at the edge of the field, clutching a pink flowered suitcase to her chest. The image of this suitcase signified all the pain she had been holding onto. Year after year she had been stuffing it with one pain after another until it was ready to burst open, exposing its contents of all the emotions hidden inside.

She imagined herself stepping into the field, taking one baby step after another, until she could see her daddy with arms open wide, calling her into his presence. With her suitcase still held tightly to her chest, her pace quickened and she moved closer. She began to run to Him, smiling jubilantly as she leaped into his arms. He took the suitcase from her and He released it into the air as it vanished.

Her suitcase filled with everything but treasure was no longer weighing her down. She felt free again, jumping in the air, dancing, laughing...tears turning to joy...and her heart as light as a feather...the way she remembered it to be back then. The way He made her to be! He held her close in His tender arms of mercy and comforted her, letting her feel His blanket of security wrapped around her soul.


The little girl is back...in her daddy's care!

The sun was beginning to set. She realized she had been there at the edge of the field all afternoon…with God!   It felt like just moments!
As she drove the car out of the lot and headed home, she turned on the radio and was amazed to hear this song playing at that very moment! Smiling ear to ear, she turned up the volume as loud as possible and delighted in every word as she knew it was true! http://www.godtube.com/watch/?v=FJM1MCNU

I can't get enough of that song!

p.s...this story is not about anyone in particular...
but...it could be about everyone!
Posted by A multi-dimensional life at 5:25 PM 11 comments: