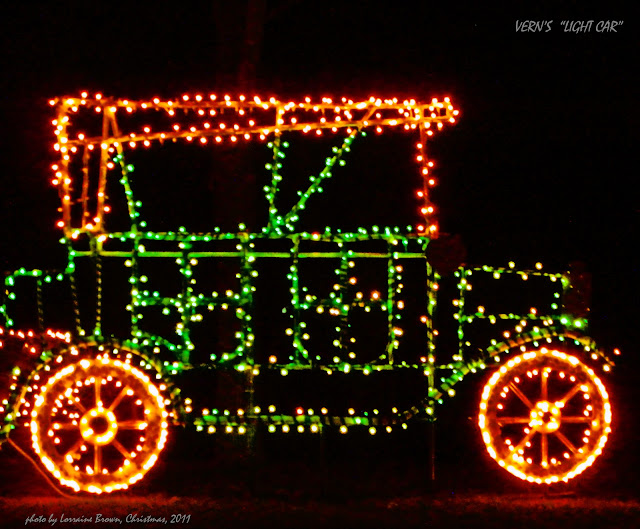 This crafty light display is just one of many fascinating masterpieces from our friend Vern's Christmas light show which he displays each year outside his home. Through the years Vern has been creating these gems with his very own hands, using pipes to construct the frames and his display has grown to be quite spectacular!  As I drove friends past his amazing winter wonderland, we took numerous photos. I didn't get a good panoramic shot, but loved this one because it really tells his story well. It is a replica of one of his several antique cars he lovingly cares for and still exhibits at various car shows in several states....even now in his 90’s!


Vern gets a kick out of entertaining passersby with Christmas music playing softly in the background. If you open your car window, you can sing along with the carols as you marvel at his handiwork.  He has even constructed mailboxes which look like the real deal where children can drop off their wish lists. I'm not sure if he still does this, but there was a time when he would drive to Santa Claus, IN to postmark his handwritten replies to the letters Santa received.  What a jolly soul he is!  I often wonder if perhaps he just might be Santa! ;)

Vern's love of friends, family and neighbors is evident by his acts of kindness and his sense of humor lights up our hearts

just like the December sky outside his
home for the holidays! 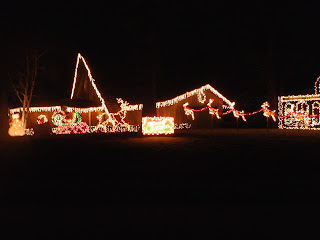 Rudolph leads us through the night,

And under the twinkling sky we see... 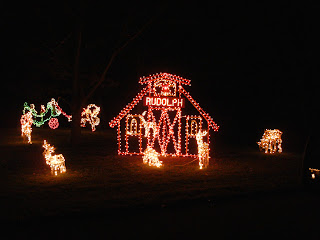 Snow people and the candy shop,

Cause all passing cars to stop,


All made by just one crafty soul,

Assembled with his hands by day...

By night his vision casts its glow, 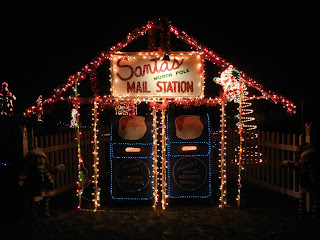 A thousand lights show us the way...


Just one man so strong and proud,

He need not say a word,

To each of us his hope abounds,

His love is clearly heard...


And we think of Vern not only during Christmas season,

But every day throughout the year, 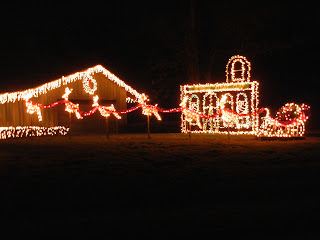 For oh so many reasons...


He always lends a helping hand and always with a smile,

If you ask him for a favor, he goes the extra mile...


A tower of strength, his roots run deep 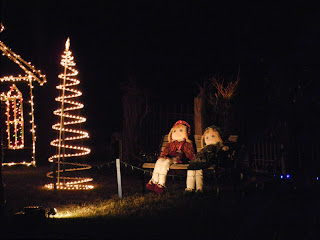 His life is an example

to all who know him well,
And each of us have precious

Draws crowds from miles away... 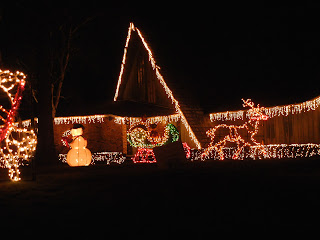 But the sparkle from his smile

Warms us each and every day!


Posted by A multi-dimensional life at 4:22 PM 3 comments: