Hi Five! My Soup Gets a Ten!

﻿﻿﻿I'm lingering in some fun from 2010 ~ Just before Christmas I was informed that my poem "He won't eat my soup" would be published by Chicago Poetry! I was excited to receive my copies of Chicago Poetry's Cram Volume Ten, which consists of
"The Best Of  10"... poems written in 2010~
I was honored that my silly humor had been recognized once again.


Back in the summer, I won first prize for Highland Park's funniest poetry contest for my poem   Cheaters (subject: reading glasses)!

Then Cram 9 published me for  What my momma said (derived from my mom's wise words, "pretty is as pretty does")!


I'm having fun with these little recognitions and feel blessed to be able to share them here!  So, in honor of Cram Ten and my husband, who continues to inspire me :).....I will re-post my poem and my recipe for the soup which (despite my husband's critique) received praise from foodies as well as poets!

I don't know if he has an aversion to squash necessarily, because he will eat my spaghetti squash (as long as I smother it in marinara, or better yet, meat sauce).  He just took one look at this beautiful pot of soup and scrunched up his cute nose, shook his head, and veered in the opposite direction.


Well, I loved it....and since I had an entire pot to myself, I also figured out another way to use it.  The first night, I had a second helping, but the second night I decided to make a pasta sauce out of the remainder by adding Parmesan and a splash of white wine, just a touch more garlic...and voila!  Another winning dinner for me!

You might ask....what did your poor husband eat?  Well, let's just say the deli turkey and the extra sourdough  bread  I bought came in handy for a couple of days!

Actually...here's the disclaimer!  I'm very fortunate to have a husband that will eat "practically" everything I put before him.  He usually praises my cooking.  I used to think he only complimented it to trick me into thinking I was a good cook; therefore wanting to spend even more time in the kitchen.  Since it's just the two of us, and most cooks are their own worst critics, I guess the verdict is still out on that one! :)

I found this beautiful soup recipe in "The Fresh Market Grocery" magazine. They often have unique recipes and the photo grabbed me!  I changed it up just a bit and made it my own.  Here is their original recipe and I will highlight the little changes I made:

He won’t eat my soup! 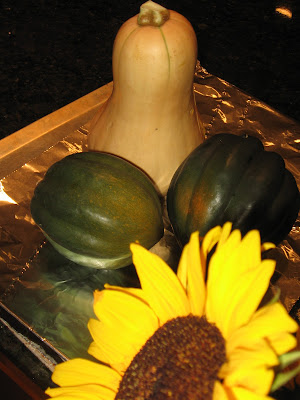 Husband hates squash
Won’t eat my soup,
Says it looks like slimy goop -
His tastes are unrefined...
Diet pop and chips for him,
I like cheese and wine!

I want to try to teach him
Everything I know...
Chance of this is really slim,
I learned long ago -

Old dog won’t learn new tricks,
Still hanging onto youth,
Teen-age snacks are his kicks,
He will not eat my soup!

Like a gas tank running on empty,
He’s running on fumes…
His habits are too hard to break…
All the junk he consumes!

He’ll break open the tums before he hits the sheets,
Tossing and turning...esophagus burning...
From his tasty evening treats!

I guess I'll pick my battles,
This seems to be a loss,
I'll bite my lip when he eats that dip,
'Cuz it’s clear I’m not his boss!

I think that if I show him,
By example he might see
That healthy eats are not so bad,
They seem to work for me!

But even though I try…
I’m still thrown for a loop…
He shakes his head and walks away…
He will not eat my soup!

Steps:
Preheat oven to 400. Cut butternut and acorn squash in half lengthwise. 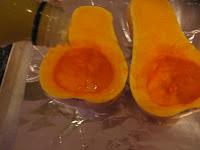 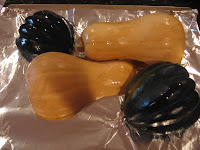 Use 2 TBSP of olive oil to coat insides of squash.

Lay face down on baking sheet (not you...the squash!)

and bake (the squash) in preheated oven for 30-40 minutes
or until tender. 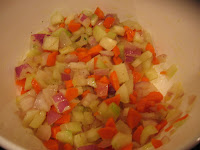 Use remaining olive oil to saute carrots, celery and onion in a medium sized stock pot until tender. Add garlic, salt and pepper and chipotle seasoning, sauté an additional
2-3 minutes. 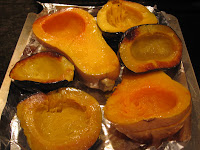 Remove squash from oven and let cool. (The squash can be cooked and cooled overnight or well in advance of the soup preparation.)

Scoop meat from squash and add to pot with vegetables. 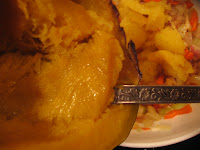 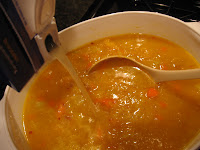 Add broth & bring to boil. Reduce heat, cover and simmer for 30 minutes. When vegetables are very
tender...
use an
immersion blender
or
food processor to puree the soup. 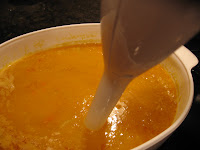 Add whipping cream (or half n half) to the pureed soup, stir to blend and return to heat until ready to serve.

Place the toppings in small serving bowls on the table and allow guests to garnish their soup.

****To make the beautiful pumpkin soup bowls as in the fresh market photo...carefully cut off the top, use a spoon to scoop out the seeds and strings, and use a paring knife to scoop out the flesh all around. Pan sear the edges for a rustic look. Be sure to reserve the pumpkin meat for a homemade pie! ****

I served it with fresh, warm sourdough bread (thankfully by husband did leave some for me)!

I'll definitely make it again....oh, and the pasta sauce I made the next day was also a comforting dish!

For the Parmesan butternut pasta sauce:   Simply add a splash of white wine to the soup and simmer over medium heat; add grated Parmesan cheese and stir until bubbly and thickened!  Ladle over your favorite pasta, sprinkle with fresh, shaved Parmesan and serve!  I love this with campanelle (the cone shape of the pasta traps the sauce and pine nuts inside)!