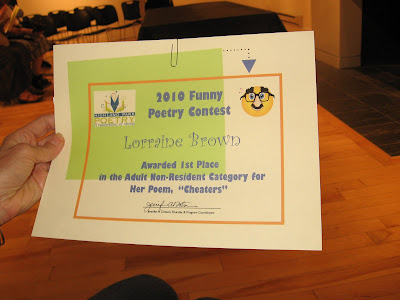 What an exciting week it has been!


I've been writing like crazy...recipes, poems, short stories...entered a recipe contest as well as a couple of poetry contests! A few weeks ago, I decided to step outside of my comfort zone and enter one of my poems in a contest...entitled: "Highland Park Poetry 2010 Funny Poetry Contest".


I've been writing poetry since childhood...my collections range from deep, introspective and poignant to light-hearted, frivolous and silly. My sense of humor has been described as a little off beat and sometimes even a tad sarcastic. My take on life often has a "Seinfeld" sensibility in that I notice the humorous and yes the ridiculous snapshots of various situations as I observe the happenings of every day life.

It was a kick that the first contest I had the courage to enter was one for a "funny" poem...So many poignant, emotional writings, and ...I entered a contest for a funny poem. I sealed the envelope, cringed, flinched, blinked and dropped my submission into the mailbox.

A couple of weeks later I received an e-mail and...gasped in amazement when I read the words: "Congratulations Lorraine, Your poem "Cheaters" has won First Place in our poetry contest"! My reaction: "First Place?! First Place?! Won?! Won First Place?! Ahhhhh!!!!!!!~ I can't believe it!" Then the silly happy dance followed!

I asked my poetry friends, "Does this mean that I am an award winning poet?!" The resounding reply was... "YES!!" 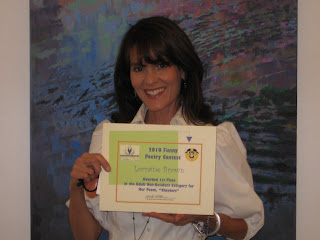 And all because of Presbyopia! Yes...despite my husband's laughter every time I say the word (he actually thinks I'm making it up)... it is an actual medical term for the dreaded over forty need for reading glasses! As much as I complain about this stage in life and all the lovely things that accompany it, I have to say that I am probably more grateful for this inability to read the fine print than anyone! After all...it gave me the subject matter which would eventually become my prize! 😏

My poem, "Cheaters" is featured in the Highland Park Poetry Muses Gallery during the entire month of July! 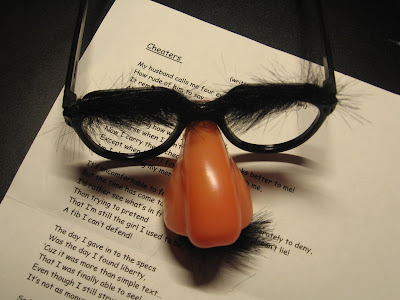 My husband calls me four eyes,
How rude of him to say.
It reminds me I'm getting older,
Along with all the gray!

The lenses change my point of view,
It's amazing how well I can see,
Of course, when I don't wear them...
He looks better to me!

Now I carry these cheaters everywhere with me,
Except when I can't find them...
Am I also losing my memory?!

It's uncomfortable to face the facts I've tried desperately to deny,
But the time has come to just give in 'cuz my vision doesn't lie!

I'd rather see what's in front of me,
Than trying to pretend
That I'm still the girl I used to be...
A fib I can't defend!

The day I gave in to the specs
Was the day I found liberty,
'Cuz it was more than simple text that I was finally able to see!
Even though I still struggle with carrying them around,
It's not as monumental as the freedom I have found.

So he can make fun of my cheaters,
His day is coming too,
When he'll have as many eyes as me -
And a clear point of view!

Even though when I don't wear them...
My hubby looks better to me,
With two eyes or with four,
I still love what I see... Oh sweet liberty!!!