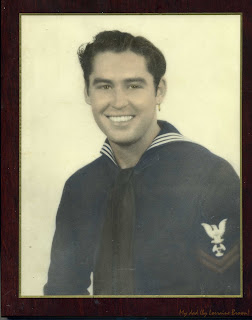 
When I was a little girl, I would stand by the door
when it was time for my dad to arrive home from work...

all bubbly with excitement to greet him...
﻿

He'd pick me up

such a wonderful moment...

He was a hard working man; a wonderful provider for his family and a great example of what hard work really was. Knowing the value of a dollar, never squandering a cent, he always reminded us to save. He was a child during the great depression and knew first hand how difficult times can become.  I don't remember him sitting down much.  He would come home from work, and work some more...in his amazing vegetable garden, in the yard, in and around the house. He could and did repair and build anything... a jack of all trades, he took great care of us!

He had the gift of discernment...to see through a facade and tell it like it is...he was a very truthful man.

He was a Golden Gloves Boxing Champion ~ As a result, he could be intimidating to some...(perhaps the reason I didn't have many dates)???!!!

My dad had a sense of humor...a silly one! He made us laugh quite often with antics, jokes, made up names, etc. He was most humorous when he wasn't really trying! ;)
﻿﻿
He was a moral man and loved his family dearly and was "in love" with his wife, my mom with his whole heart and soul all the days of their life!
﻿
He loved God and had a great deal of wisdom (although I didn't always see it as wisdom until I matured a bit). He was one of my biggest cheerleaders in life; my mom was the other.

Yes, he was tough; he was strong and his "love language" was one of works mostly. I suppose I don't have as many soft and sugary moments to tell about my dad as I do about my mom. She was the soft place to land - he was our protector and defender...a place of security, with a sensitive heart hidden just beneath the surface.  He had layers...depth!

Despite the fact that my dad is now home with his heavenly father, I still miss him! But...someday, I'll arrive home and he will be waiting by the door for me...

He will pick me up and give me a big kiss on the cheek.  I will feel the security of the moment and the joy of being re-united with my dad.


At his memorial, the pastor said "I believe Jim is tending to the most beautiful garden he's ever laid eyes on right now, and I also believe that if Jim could tell you one thing, he'd say....'you've got to come here'!!!"

I wrote this poem after he had major heart surgery...his life was saved...


He was a strong man,
Never shed a tear,
Solid as a rock
Carried no fear...

He was a tough guy,
A hard working man,
Showed his love by the work of his hands...

Not a man of flowery words,
Nor of many words at all,
But as far as I was concerned,
He was ten feet tall!


I was sure he could carry the world on his shoulders,
Sometimes I think he even tried,
Never a doubt in my mind,
That because of this strong man,
Life would be just fine...


Every day after work, I’d greet him at the door,
He’d pick me up and kiss me on the cheek,
There was nothing in the world I wanted more,
Than this moment of the day – so sweet.


Years later…
One day after work…
He laid down to rest,
He said he felt a “funny” pain - deep inside his chest...
We knew this was bad when he didn’t fight,
And the ambulance rushed him off that night.

His heart was opened by surgery,
And then it began to melt,
With words of kindness and expressions of love,
He finally told us how he felt!

The feisty fighter had a soft side,
He showed that side to mom and me,
In a three way hug that lasted a long time,
And his tear filled words “I love my family”!

Feelings trapped inside began to flow,
In words now, not just deeds,
The size of his heart began to grow,
His spirit was set free!


I’m grateful for the tears and expressions we shared,
They mean more than one could know,
I always knew how much he cared,
But I’m glad he found the words to show.


He was a strong man
And he made it clear,
That a strong man’s
Not afraid to shed a tear...


He was a strong man
With a gentle side,
The gift he gave me etched precious in my mind...

Was the day my daddy cried.

"Be kind to thy father, for when thou wert young, Who loved thee so fondly as he? He caught the first accents that fell from thy tongue, And joined in thy innocent glee." -- Margaret Courtney ..

Posted by A multi-dimensional life at 4:13 PM

I don't think I knew your dad was a Golden Gloves Boxing Champ...SO AWESOME!!!! I love this post, and your poem is powerful....oh Bella, when is your greeting card line coming out???

Beautiful poem for your Dad, he sounds like a wonderful example of what a father should be. It was my husbands first father's day without his, and I know that he looks forward to seeing him again one day too. Hugs.

Lorraine this was the most precious testimony of your love for your father and he for you.
Oh my goodness...whata precious gift God hs given you in him.
This so touched my heart...my daddy and I are so close and I can just feel the love you have for him. Yes you will embrace him on that day and live with him eternally in our Fathers embrace.
Bless you sweet friend and sister in Christ!

(I loved the photos of you and your dad and your mom and dad...so lovely!)

All my heart,
Deborah xoxoxoxoxoxo